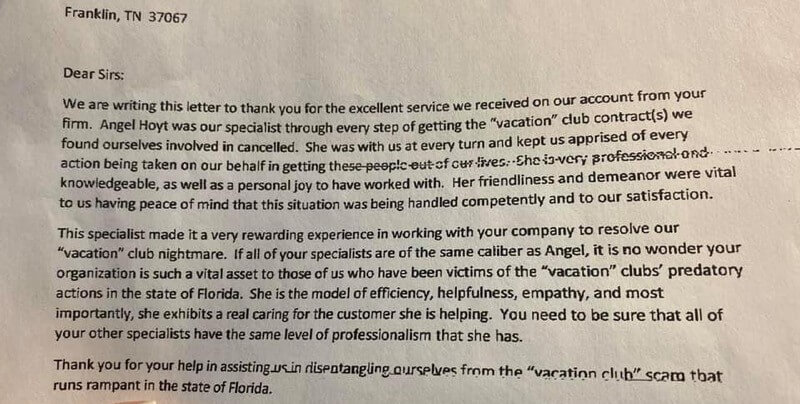 There are so many types of client stories here at Wesley Financial Group. This is one of the many heart wrenching stories of a family who was almost destroyed by timeshare debt.

Bill and Betty explained that the club was not financially doable for them at the time. The sales rep’s solution was to put them on a payment plan. Bill and Betty told the salesman that their credit was not in a place to make such a large purchase. They rigorously wore down Bill and Betty until Betty told them to run her credit to see for themselves that this was not a possible purchase for them. A few moments later, the sales representative came back and told Betty that she was the proud new owner of an American Express credit card through Hilton. But Betty had not agreed to purchase anything, and they had just opened up a credit card in her name without asking. After opening the line of credit in her name, they further tricked Betty into joining a Vacation Club.

Each time Bill and Betty used their club membership they were talked into going to the main office for “upgrade” opportunities. The same tactic was used again, but this time they opened a $10,000 line of credit in Bill’s name. Again, Bill and Betty did not agree to this line of credit being opened in their name.

After receiving a statement in the mail, Bill and Betty were shocked at the amount they owed in maintenance fees. It was much higher than they were initially told they would be. They reached out to Hilton thinking there must have been a billing mistake, but instead found out for the first time that they were, in fact, the owners of a timeshare.

Bill and Betty reached out to Wesley Financial Group, LLC, after hearing one of our radio commercials. Desperate to get out from under their almost $50k in mortgage debt, they put their trust in Angel Hoyt, a resolution specialist with WFG.

“Angel Hoyt was absolutely essential to our getting out from under this debt,” said Betty. “She is knowledgeable about how this "industry" works and was able to assist us with each step to get these people off of our backs and out of our lives. Without her assistance, we would still be victims of the "Vacation" club's predatory actions. Angel has been an absolute joy to have as our specialist and delivered on everything that the Wesley Financial Group LLC promised in its commercials.”

The resolution specialists, like Angel, are the heavy lifters at Wesley Financial Group. They work tirelessly to get their clients out of their timeshare contracts, and oftentimes develop a special bond with their clients. For Angel, that bond is what makes this job so special.

“It’s been almost a year since Bill and Betty’s timeshare was cancelled, and I still get calls from them just wanting to check in and see how I am doing,” said Angel. “ I found a letter from them, that they wrote to me after we canceled their timeshare, that had fallen behind my desk. I took a second to read it again, and I sat there and reflected. Overwhelming emotions. I can’t even explain how much I love these people I get to know just briefly. My heart is full.” 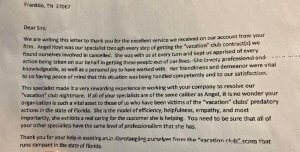 Bill and Betty were relieved of their almost $50k in timeshare debt in January 2019. They are now on the other side of their timeshare, and we are proud to say that Angel and Wesley Financial Group got them there.

If you are looking for help to get out of your timeshare the way Bill and Betty were, contact us today to see if you qualify for our services. We want to make your current heart wrenching story of timeshare debt a thing of the past. That way… you can enjoy a timeshare free future, just like Bill and Betty.

“Without the assistance of Wesley Financial Group LLC, my husband and I would still be the victims of the predatory vacation club industry that is rampant in the state of Florida. When people are roped into taking their "free" vacation and tickets to the theme parks in Orlando, they have no idea that their financial HELL has begun. You are never able to get answers to any questions that you ask about your "Vacation" package, they just keep trying to up sell you to another higher priced package. Had we not contacted Wesley Financial for assistance, we would have never known we were now the "proud" possessors of 2 vacation club condos, not just the original one we were strong armed into buying.”  - Bill and Betty